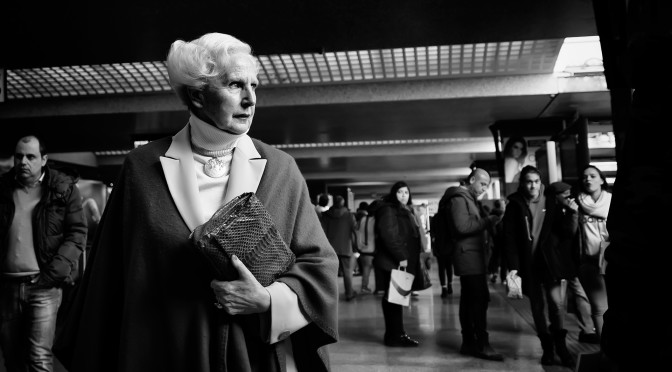 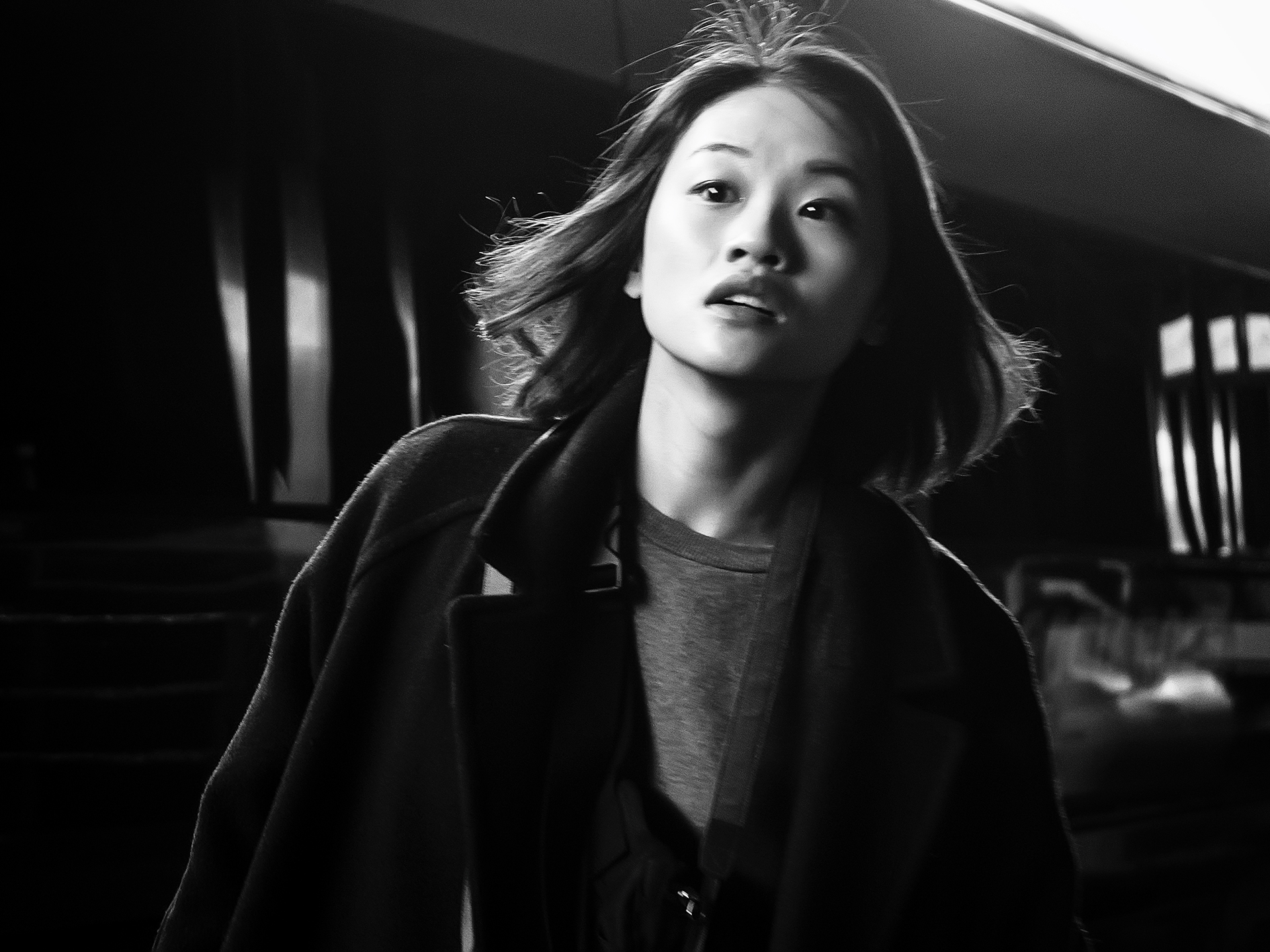 Photography is one of the few things that can always leave me amazed, in all its genres. From the macro that makes me discover new galaxies, to the glam that knows how to get me drunk, up to astrophotography that makes me come back down to earth. But it is through Street Photography that I can make peace with myself. I did not think I would find anything that could make me do it. Perhaps Music, once, before we began to hate each other. 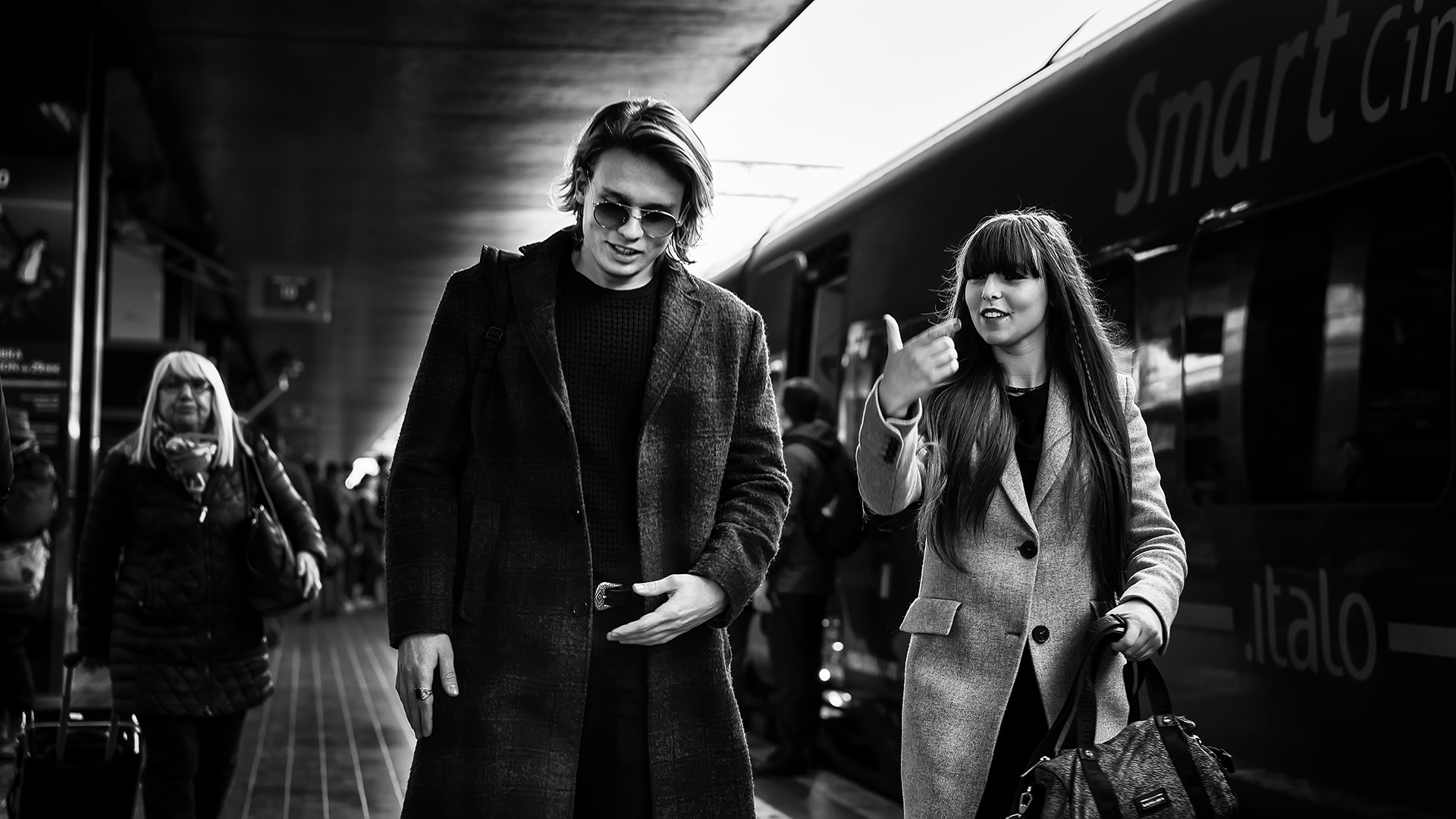 Since I was a boy I’ve always been a great fan of movies. I devoured four of them in a day, admiring, as well as the contents, the choice of shots and lights. It is from there that I draw inspiration for my compositions. When I take a picture it’s like stealing a still image from the hypothetical movie I’m shooting in my mind. Of course, deepening my knowledge on Street Photography, I met and come to admire the incredible snapshots of Henri Cartier-Bresson or Daidō Moriyama, as well as the touching photo reportages of Sebastião Salgado. But the real influence for me comes from Italian directors such as V. De Sica, S. Leone or F. Fellini; or by foreign directors of the calibre of S. Spielberg or W. Allen (of the latter in particular, I recently gladly watched again “Manhattan”, one of my favourite movies, that I watched the first time before I become passionate about street photography.. it’s practically pure animated Street Photography!). 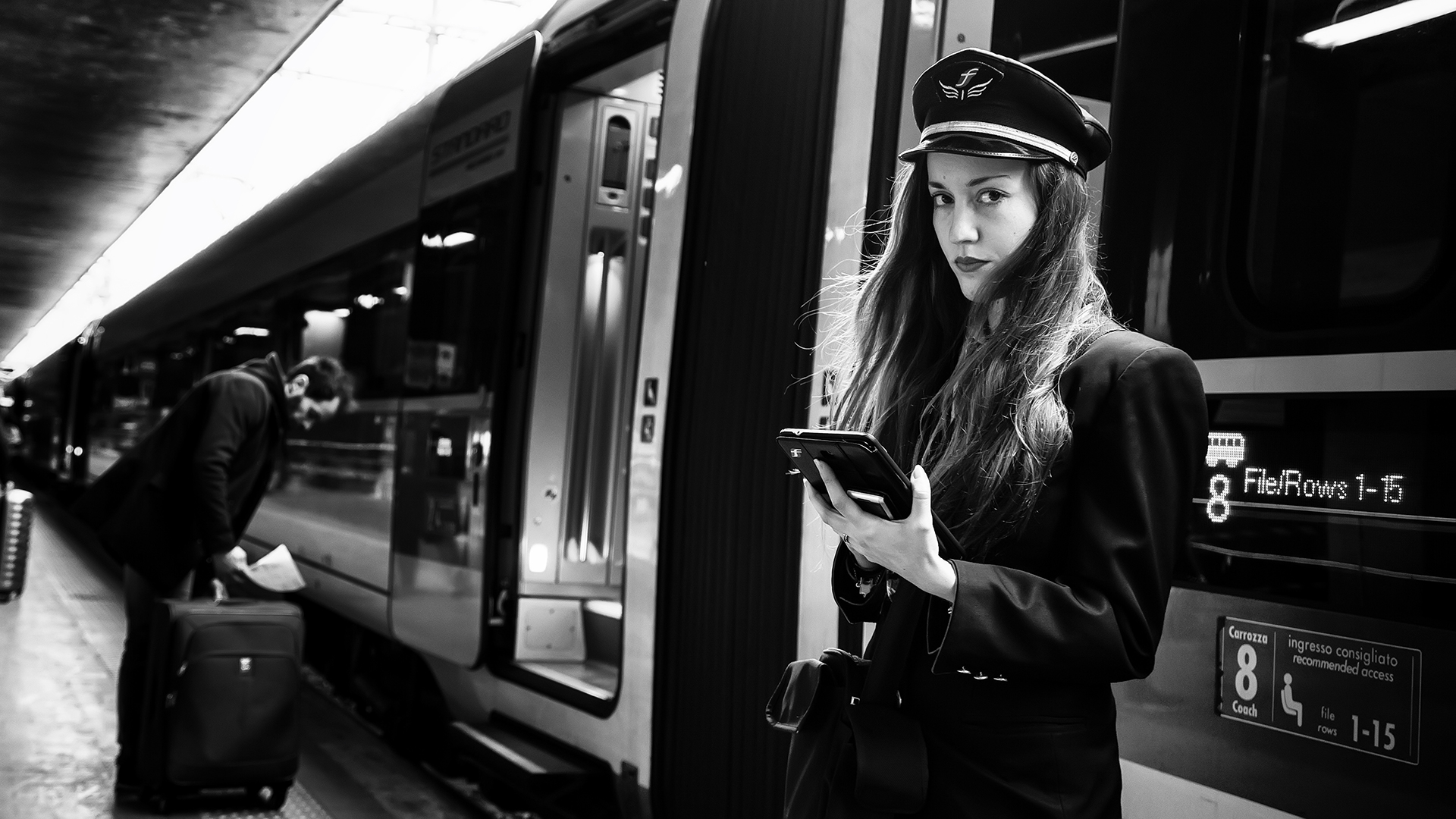 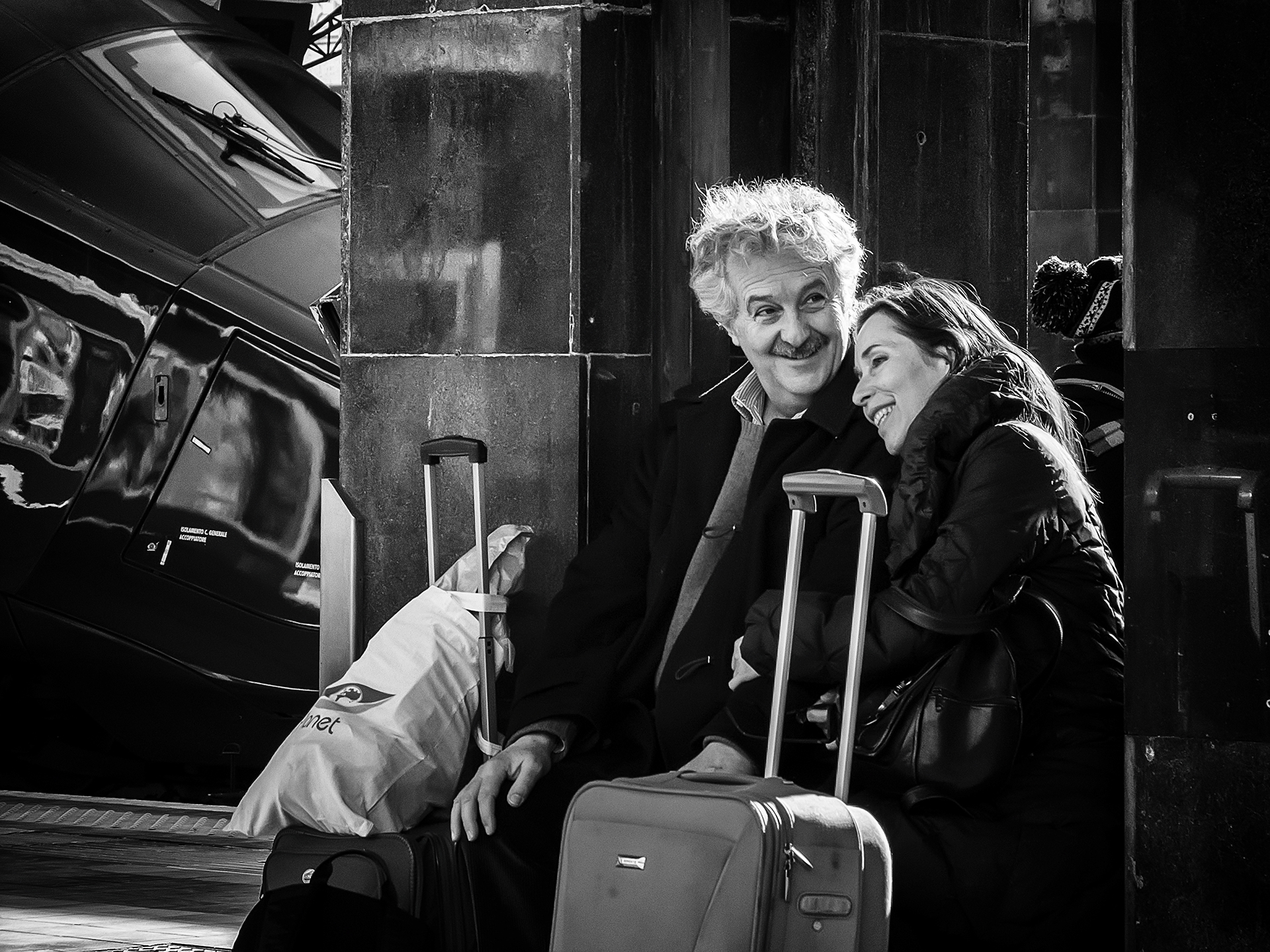 After my discovery of Street Photography, I started reading everything, both on paper and in digital form. It was enough that it concerned this type of photography. And since the greatest Street photographers were shooting on film, after receiving an old Leica M6 as a gift from my daughter, I set up a small dark room in the service bathroom in the house. I “locked” myself in it for a whole year, after having read the three tomes by Ansel Adams (“The Negative”, “The Printing” and “The Camera”). So, I would say yes, I always want to go deeper. As long as the light bulb of curiosity is on, one still has the chance to grow. 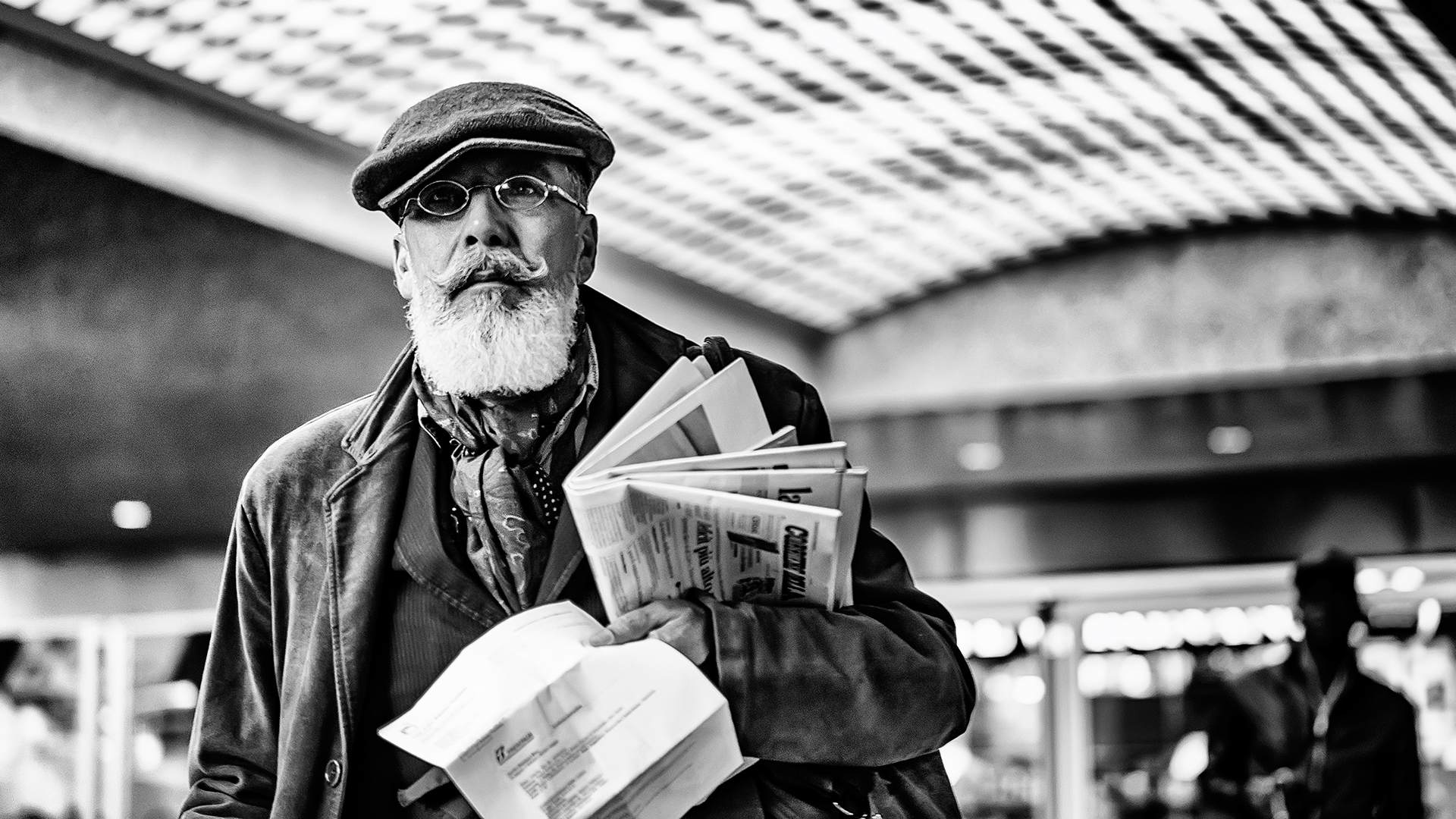 Taking a shot in the street can sometimes be difficult, dealing with people’s reaction is not always easy. What is your approach with the camera when you find yourself photographing strangers on the street?

In my private life I am a reserved person, also quite indolent. But when I am among the people and I take my camera out of the bag, I go into fibrillation: I cannot think of anything but the endless interesting images that could present to myself if only I have the courage to reach out and grab them. I defy myself, in short, using as mean to blackmail myself into action, the bitterness that I would feel in case of defeat. And I start looking around. I no longer exist, no thoughts, I cancel myself completely. I become invisible. After each capture I never stop to look at the picture (one take only as it was when I used film) and I get away quickly from the place of the “crime”. It has happened that I took pictures of people while I was in the company of my wife: she says I’m very brash (actually she used a much more colourful expression!). But I do not realize that. 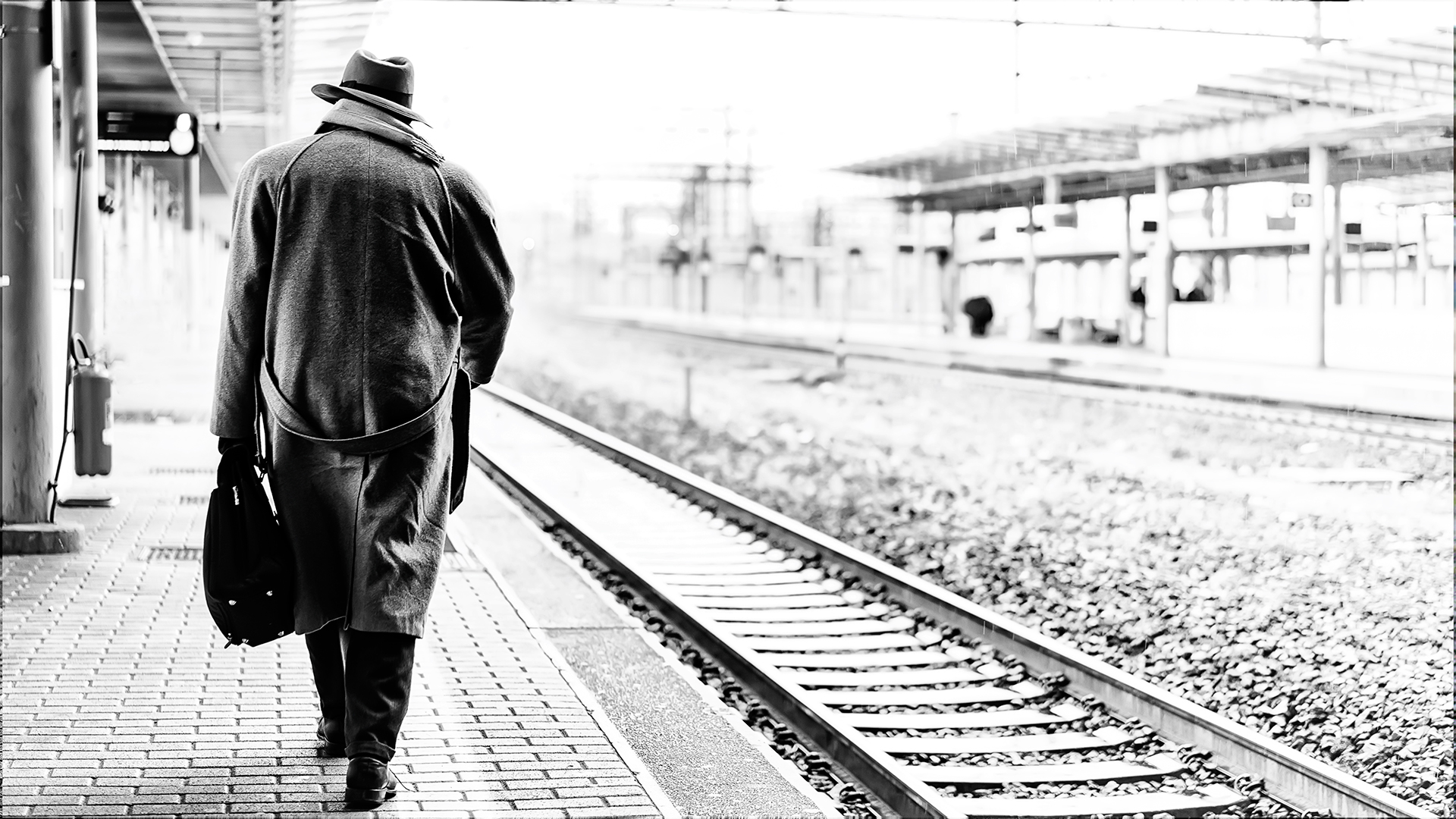 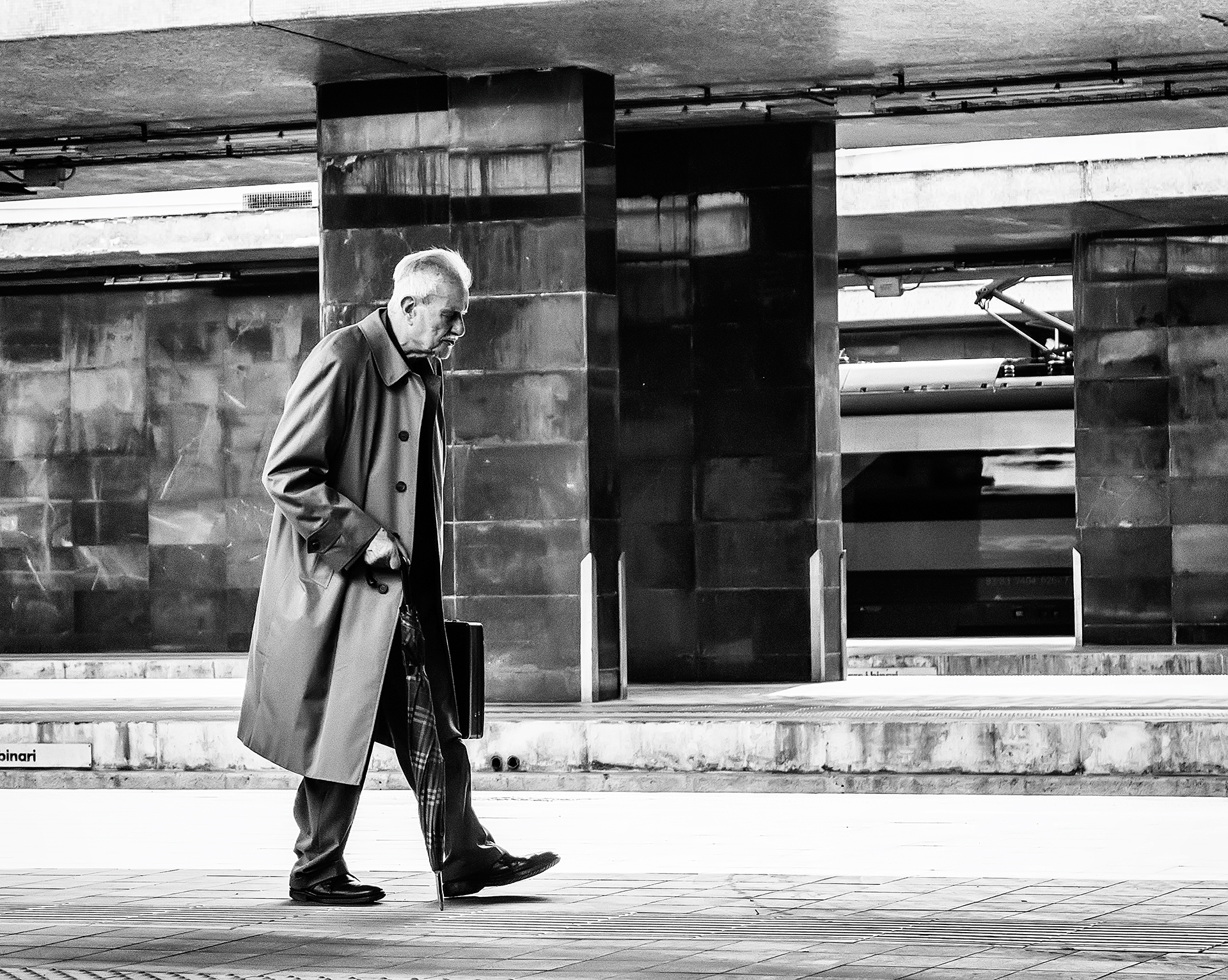 Use only fixed lenses: 28mm, 35mm, 50mm. Rarely 85mm (My favourite at the moment is the Sony 55mm). Only mirrorless cameras due to their reduced size and weight, and only in the black versions. The silver ones are too flashy. I never raise the camera to my face. Let’s say that I prefer to shoot “from the hip” using only cameras that have a swivelling screen, which I use as a cockpit, and leaving the grid for the “rule of the thirds” activated. In this way I am less conspicuous. I rely completely on the preview of the camera: the LCD already gives me back, live, the final photo even before shooting. So, no more exposure meter, totally obsolete. 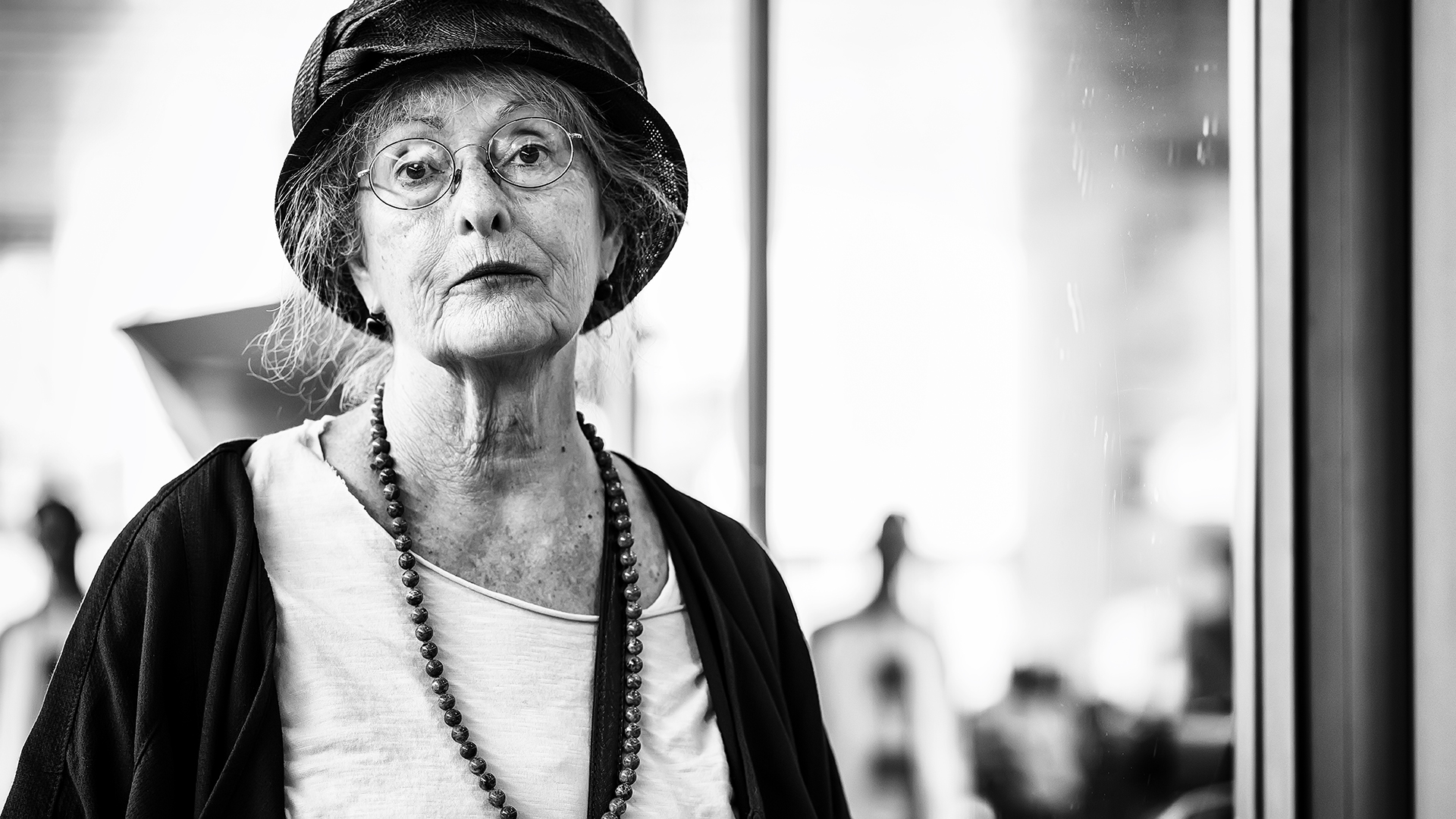 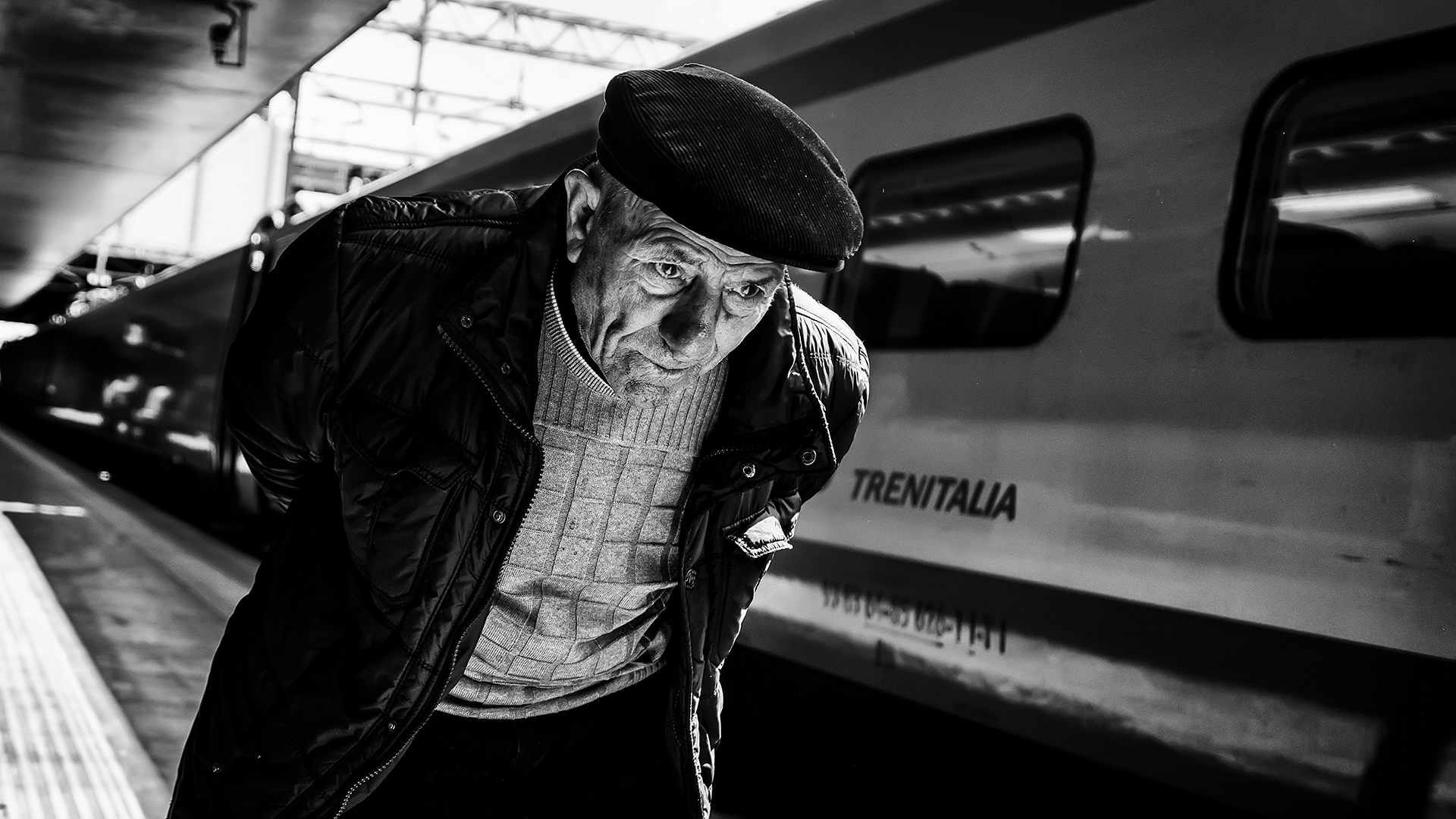 In recent years, Street Photography has boomed, what do you think it’s due to? And what evolution has there been?

I asked myself the same thing but I do not know, I cannot answer you. I think it’s a bit of a fashion, in some ways. Certainly, the story of Vivian Maier has helped to turn the spotlight on this genre, but I’m not sure that there is a real awareness of how Street Photography, in addition to being often quite exciting, can also act as a historical archive on the uses and customs of our era. Myself, when I shoot, I still do not feel this responsibility. But it is a fact that deserves more attention. 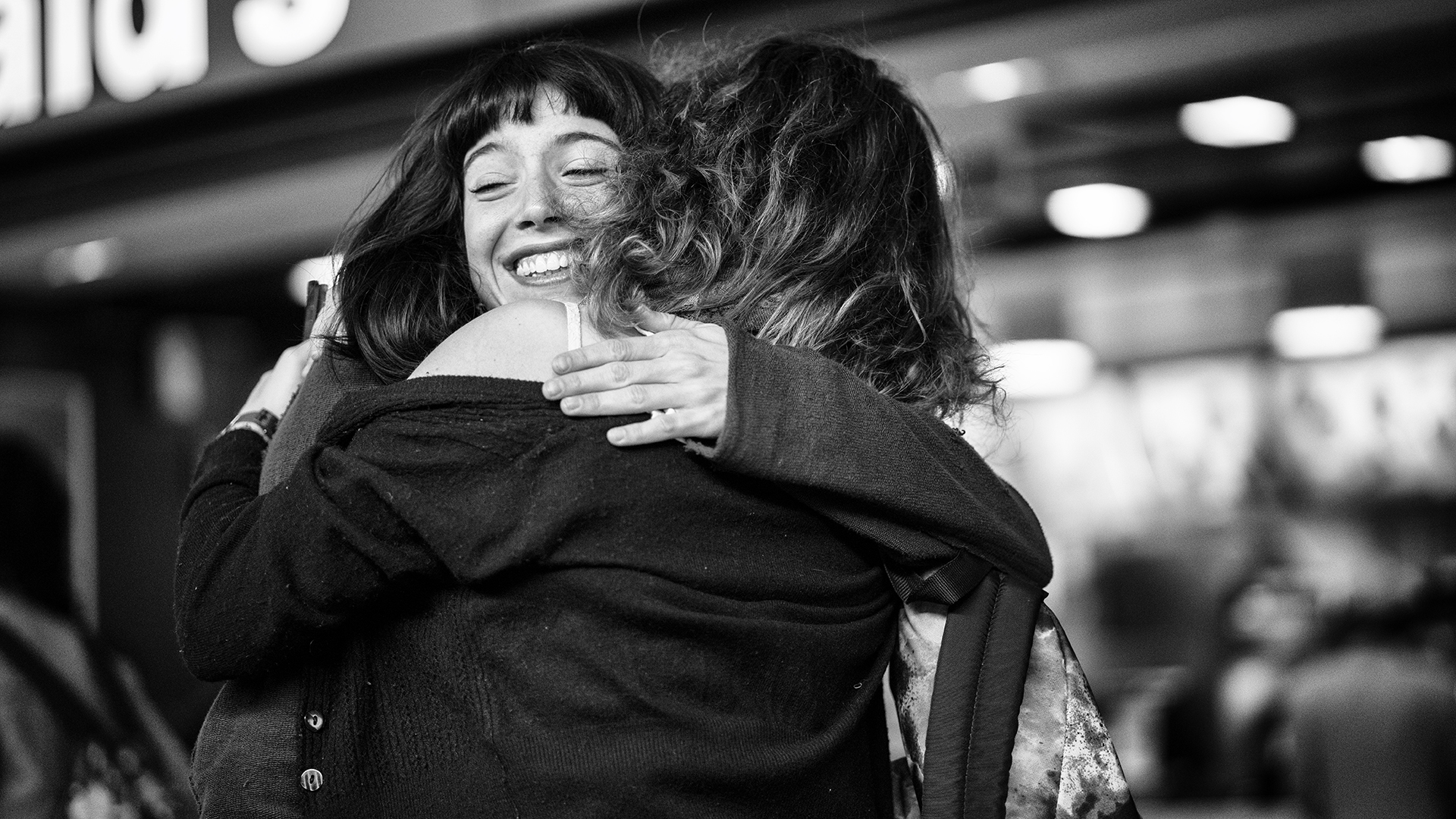 Rome is a city of a thousand faces: from the degradation of certain suburbs to the beauty of its monuments: which subjects, both as people and places, inspire you more and urge you to look for the shot, or do you think better represent this city?

It is the Termini railway station, my hunting territory. Immense crossroads of people of all ethnicities and nationalities. A few years ago, I moved out of Rome, in the province of Viterbo, opting for life as a commuter. This led me to frequent the station every day. In this fascinating place many stories are intertwined and deserve to be told. In addition, people are very distracted, less attentive to passers-by and more concerned with trying not to lose the train or say goodbye to each other. It is easier to approach them without them noticing.

Artistically, if we want to say that, I was born a musician. I started studying guitar at the age of 10, learning the art and putting it aside. At that time, my parents ran a bar. I can say that I spent my childhood on the street, observing coffee customers and passers-by in front of its entrance. Many years later I found myself a street singer, at a time of serious economic difficulties, due to various vicissitudes. This lasted for four very long years. I saw so many people passing by every day. And I learned, observing them, to recognize the various personalities immediately by their way of walking. Clothing is almost always a warning sign: underneath a wide-brimmed hat there is often an original expression. To summarize, it’s my background that made me sharpen my senses to spot who has a story to tell. To all this, of course , one must always add a bit of luck on which one must count to be in the right place at the right time.

Do you know what I love about street photography, that no other photographic genre has? Every moment is unique and unrepeatable. Although within a scheme, there is a lot of improvisation, as in jazz.

Has street photography, as a genre, developed in you the ability to photograph in any light condition and to interpret everyday life situations with an appealing vision?

Of course! Unlike work in the studio, where you bend the light to your needs, the opposite happens in the street and with very sudden light changes, especially along itinerant routes. It is you who must know how to adapt by quickly dealing the correct camera settings, preparing it for each new variation of the light. I find all this very stimulating and rewarding. 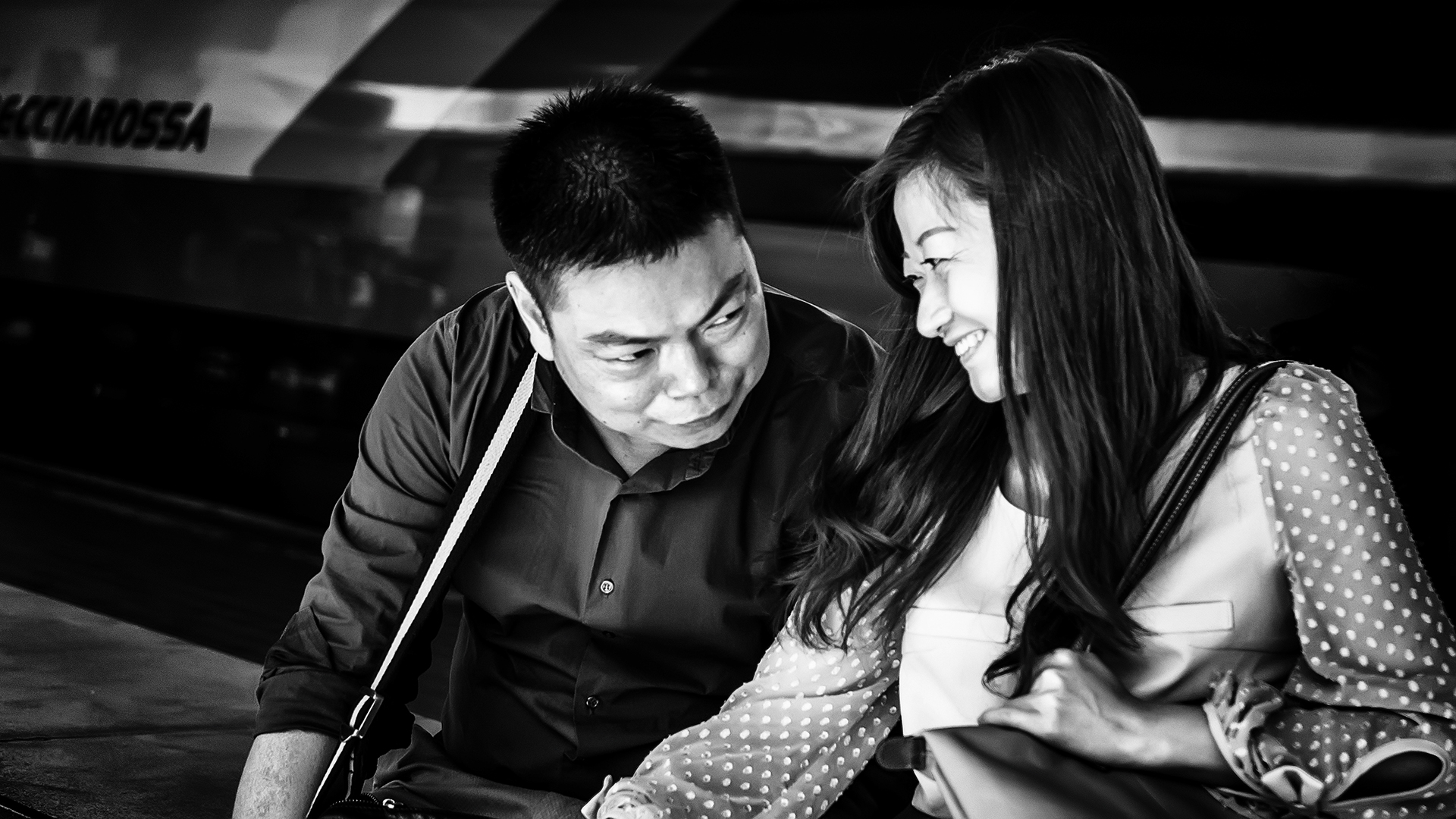 In a street picture, do you think the contrasts of light are important to tell a story or are just an aesthetic fact?

As far as I’m concerned, they are just an aesthetic fact. I love contrasted images and I prefer black and white photos in which there are all shades of grey, from pure blacks to absolute whites. The important thing, however, is that the snapshot tells something while as well as taking care of the composition, following for example the “rule of thirds” and avoiding chaotic backgrounds. I really like taking care of the aesthetics of my shoots, but if I do not “capture” my “protagonist”, aesthetics is not enough for me. 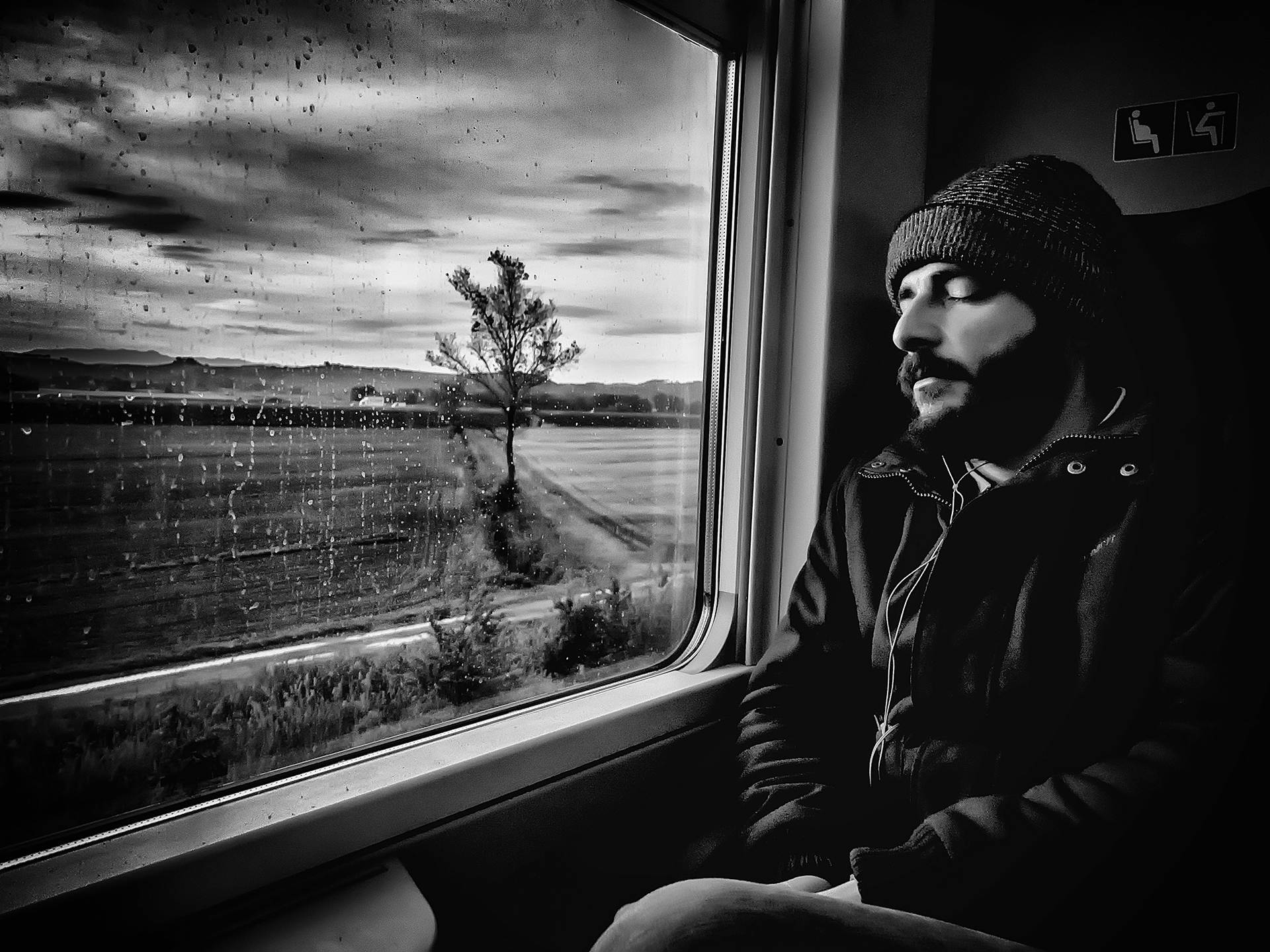 Which are the limits of ethics in a street picture, or is it possible to shoot everything?

Well, no, we cannot always shoot everything, unless we’re in a country where a coup d’état is under way and we’re in the middle of a civil war! In this case, however, we no longer speak of Street Photography but of Reportage, two genres intimately linked but at the same time very different.

Going back to everyday life, without too many examples, we should have the sensitivity of never hurting the feelings of anyone, always respecting human dignity.