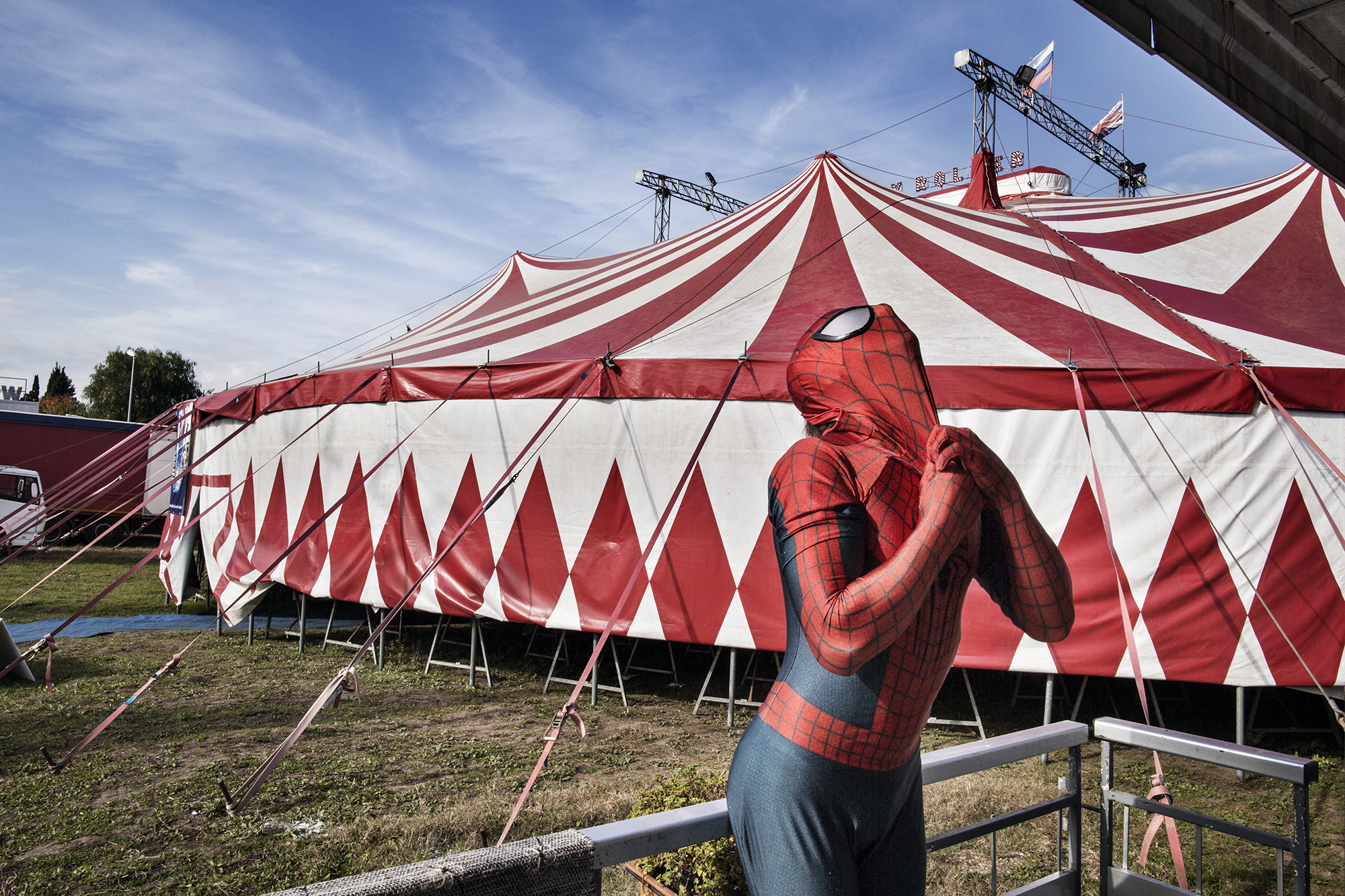 Photography has appeared to me late in life and I never thought it could involve me so much to literally absorb every moment of my existence. From the passion for nature, I started practicing macro photography and from the observation of the “particular”, I have learned to look and carefully observe everything around me. I like being around people, I love people, I am curious and a great observer of mankind. I started doing street photography ten years ago and now I wouldn’t be able to live without.

The ability to freeze the instant and the unusual, gives me an indescribable feeling.The interest in humanity led me to investigate the everyday life, not only on the street, but wherever there could be an interaction among people.Besides freezing images of faces and situations, it’s nice to be able to tell a story by feeling and communicating emotions. Today photography for me is an urgency, a passion, an encounter, a means to investigate the reality that surrounds me.

Robert Capa, Henri Cartier-Bresson, Sebastião Salgado, Elliott Erwitt and Gianni Berengo Gardin, William Klein, Robert Frank, Robert Capa, William Eggleston, Fred Herzog and Joel Meyerowitz. Vivien Maier for the strength, sweetness and humanity of her shots. Alex Webb for his ability to capture almost always complex interconnections within the frame. Henri Cartier Bresson for his attention to the composition in the shooting phase and the speed of execution. Martin Parr for his ability to highlight, through investigation in everyday life, social aspects of contemporary society. David Alan Harvey for the intensity of his shots and for the sympathy and kindness towards me when he came to Rome. In addition to them, some exceptional Italian interpreters such as Piergiorgio Branzi, Paolo Pellegrin.

In addition to the continuous study of the photographic language, my passion leads me to visit exhibitions, buy books, go to museums, watch films, travel, live different experiences, have contacts with photographers, follow their professional path and work on projects to create stories to tell. I find it useful to read monographic books by great photographers to understand the birth of a project and all necessary and relevant actions to develop and finalize it.

Each place is potentially suitable for interesting shots.
In addition to the street, I also like to shoot in indoors places, such as shops or museums.
In every place, I try to make myself invisible so as not to attract the attention of people close to me.
I have made many shots, and situations in which I had to justify what I was doing, were very few and they always ended in a conciliatory and friendly way.
To feel comfortable, I choose a crowded place, or an interesting background and I wait for people to come towards me.
I don’t look directly at the subjects to make it seem like I’m shooting what’s behind them. I almost always use a lens with a short focal length. Lenses from 24 to 35mm are fine as they are less visible and with a wide shooting angle.
I try to be as natural as possible, always showing a smile of cheer.
Should the person being photographed feel uncomfortable, I show the photograph with a smile and give my business card by offering to send it to them via the web.

It’s a photographic genre that, for some years now, has taken hold, recruiting numerous followers.
Perhaps because it is mistakenly believed that it’ s easy to take street pictures believing that it’s just sufficient to take a picture in the street but it’s not the street that makes it so, but the way to capture the moments.
It is a dynamic and above all instinctive form of photography. It documents relationships, emotions and events in which men are the main protagonists. Street is the place where relationships are most frequent, where you can find thousands of interesting, unpredictable, unique and situations able to highlight aspects of everyday life.

Street photography is of considerable social importance. Through the lens, the street photographer captures events that are happening on the street, highlighting comic and ironic aspects. First, they describe glimpses of everyday life, characterized by a strong realism.

Secondly, the moments recorded in street photography are unrepeatable, more than in other genres. Each photo, except perhaps those taken in the studio, fixes a scene that will never be identical. Then, without a shadow of a doubt, an indisputable strength are people.

My object of photographic observation is above all the human being and the environment in which he lives. I like to share stories that somehow tell someone’s life especially in the social sphere. My gaze starts from something that has excited me, it can be an article I read, a book, an experience, an encounter or a testimony.

When I go out, I always carry my camera with me so as I donìt bitterly regret not having brought it if an interesting situation arises and, while I walk, I look around as if I were a hunter and often I identify the scene or the person who has potential. I follow it because sooner or later, I feel that something will happen. Most of the time, the choice of theme is not premeditated but rather dictated by casual encounters that excite me and make me open my eyes to aspects I previously ignored or knew superficially. My latest works: “The fabulous destiny of Dainaly”, photobook edited by DerLab and ““I sogni li spendo per strada” (I spend my dreams on the street) the latest in the home stretch, were born by chance but they took me three years each.

I have ethical principles I strictly follow. I never photograph beggars, cripples, the sick and all people in trouble. Talking with Tiziana Faraoni, photo editor-in-chief of the weekly magazine L’Espresso, we discussed whether or not to publish a photo that could trouble the public and we both came to the same conclusion: in some situations it is better not to publish.

A street photo is expressive if it tells something. The feeling of having taken a good shot is generally immediate and it doesn’t happen every day and when it does, I realize it in the evening, once back home. Much of the work that leads to taking a good picture is done before you pick up the camera, and afterwards, when you work on it. Before you capture an image, you need to pre-visualize the photo or its potential through your eyes.

I have always looked at the world around me with an curious eye to find situations that others did not see, to enter the scene, to take part in them. It is difficult to answer this question as it should be the others who recognize a style in you. I envy photographers who can be recognized by their images. It should be the goal of every good photographer to create their own style.

A photo must tell, of course, but above all it must excite. Certainly, the contrasts of light add something to the image, but if you limit yourself to them it would only be an aesthetic exercise. I’m interested in the image being emotional but, above all, in its curiosity.

In post-production I use the latest version of Photoshop and I had a super trainer, Claudio Palmisano www.claudiopalmisano.com , of which you can read an interview on my website, https://lilianaranalletta.it/intervista-a-claudio-palmisano/ .

In post-production I set myself the limit of never presenting something other than reality. For the editing and the construction of the portfolio, I attended various courses with Augusto Pieroni and Annalisa D’Angelo. In a first phase, I always print the photos that interest me for a job in order to be able to move as I like and verify their functioning. Afterwards I turn to some a person who’s experienced as you can’t be objective with your photos.

If the purpose of the shot is a b/w photo, I pre-display it in black and white while shooting. Specifically, I try to see it in its chiaroscuro values, mentally eliminating the colour and therefore the technical choices come accordingly. Black and white, colour, image cutting, shooting angle, depth of field, are just technical choices to highlight an idea, a feeling because the photo is communication.

At first, I shot single photos without any connection other than the street genre, later, not happy with results, I felt the need to work on projects. If you want to make a leap forward as a photographer, you can’t just take single shots, you must start “telling by pictures”.

Honestly, the photos taken in the past, generally do not satisfy me today even if some of them remind me of the enthusiasm with which I took them. When I was taking macro photographs, some of them were the result of hard research of the subjects to be shot and of considerable efforts in improving the technique, which was certainly not easy. For a while, I have been working hard on the reflections of dew drops and certainly some of these images are very dear to me. In street photography, I am very fond of an image taken in a circus as in that moment, I pre-viewed my project which then became the photobook “The fabulous destiny of Dainaly”.