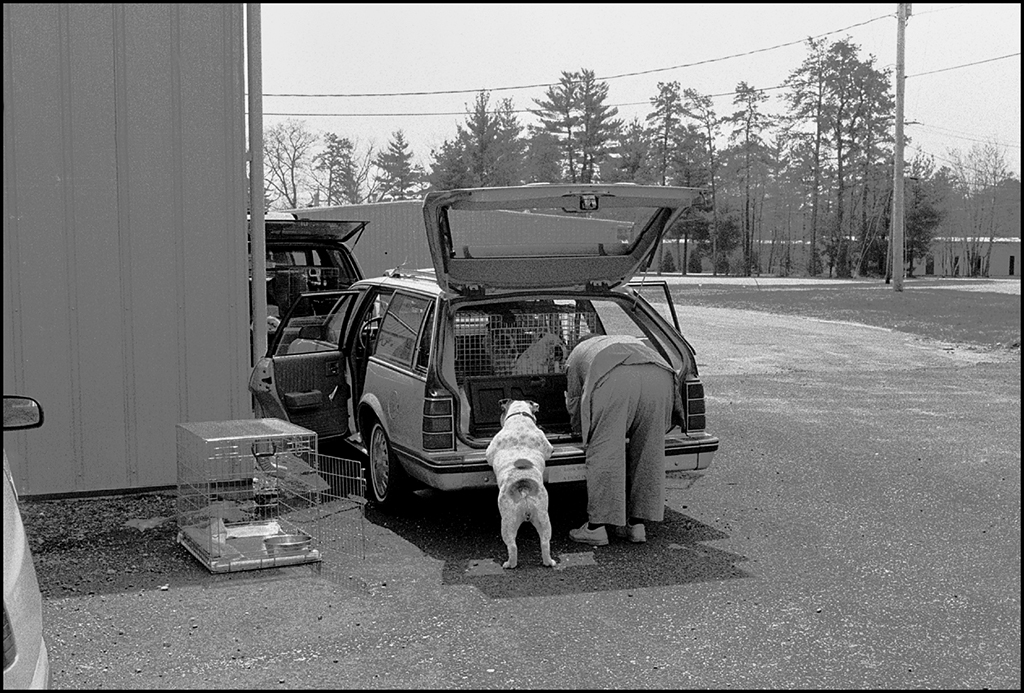 Biography : Karl Baden has been a photographer since 1972. His photographs have been widely exhibited, including at the Robert Mann Gallery, Zabriskie Gallery, Marcuse Pfeifer Gallery, International Center for Photography and the Museum of Modern Art in New York, the Howard Yezerski Gallery, Institute of Contemporary Art, Decordova Museum and The Museum of Fine Arts in Boston, The Museum of Fine Arts in Houston, Musée Batut in France, Photokina in Cologne, Germany, and The Photographers Gallery in London. He has received fellowships from the National Endowment for the Arts, the Massachusetts Artists Foundation, the Massachusetts Council on the Arts and Humanities, the Massachusetts Cultural Council, the Kenan Foundation and Light Work Visual Studies. His photographs and visual books are included in the permanent collections of the Museum of Modern Art, NYC, Museum of Fine Arts, Boston, Museum of Fine Arts, Houston, The Addison Gallery of American Art, Polaroid International Collection, the List Visual Arts Center at MIT, the Guggenheim Museum, the New York Public Library and the Boston Public Library. He has been on the faculty at Boston College since 1989. In 2000, Baden was the subject of a 26-year retrospective exhibition at Light Work Visual Studies. “How did I Get Here?”; a 48-page catalogue, accompanies the exhibition. In 2012, Baden was one of 15 photographers from around the world, living and deceased, to participate in the exhibition “Henri Cartier-Bresson and the Question of Colour”, held at Somerset House in London, England. A 250 page book accompanies the exhibition. In 2014, Blue Sky Books published a monograph of some of Baden’s work from the 1980s, entitled “Work from two Bodies”. In 2016, Retroactive Books published “The Americans by Car”. In 2016, Retroactive Books published “Taking Sides”.

After my immediate family, photography is of paramount importance. I pretty much define myself through it. As to your follow-up question, “A few years ago”: In one month it’ll be 50 years since I picked up a camera; a few years ago, my sense of purpose and my aspirations were exactly the same as they are now.

Too many to count, although since I reached middle age my work has been more focused on what we usually think of as the Real World; I’ve enjoy revisiting Lee Friedlander, Helen Levitt, Roy Decarava, William Gedney and the like. I’ve also been influenced in many ways by photographer friends, including Bill Burke, Judith Black, Chris Killip, Mike Mandel & Chantal Zakari, Susan Meiselas, Henry Horenstein, Carrie Mae Weems, Jack Leuders-Booth, Dore Gardner and Sandra Stark. I’ve never met Jeff Mermelstein or Michael Northrup but I love their pictures, and Don Hudson and Dave Jordano are photographers I wasn’t familiar with before social media, but now I’m a fan. The list could go on…

Been there, done that. I’ve absorbed my share of theory over the decades, and will still read up if I find a text compelling. While I don’t doubt the relevance or importance of some of it, I’ve personally found that it obfuscates as much as enlightens. More important, I discovered that I was being subconsciously directed by someone else’s ideas, often taking me in a direction that was not my own, for the sake of feeling “current”.

The situation on the street has changed, without a doubt, and not for the better. I’d say I have more than my fair share of problems in this regard. I will often bring a small shoulder bag along when I go out shooting, with a couple of books, reviews, installation shots of exhibitions, etc, in an attempt to show people that I am not someone with a suspect agenda. I usually try to stay calm and friendly, but with some people nothing works. I’ve run into an increasing number of individuals who tell me that it is illegal to photograph without asking permission. I try to explain that it is entirely legal – protected first amendment free speech – adding that in many cases if the photographer sees something and stops to ask permission, what they saw originally is now gone forever. But it’s often hard do get a word in edgewise. If I’m lucky I can shake it off and continue walking.

In the Fall of 2019, I put together a public panel discussion, entitled “When Everyone has a Camera: Street Photography, the Right to Free Speech and the Right to Privacy in the Internet Age.” Youtube link is: https://www.youtube.com/watchv=FQLqD08GpfU&t=1s

That’s a very good question and I’m not sure I can provide the answer. In fact, I had no idea that Street Photography had experienced a resurgence until people started telling me. Off the top of my head, I imagine that, quite ironically, what may be responsible for its popularity are some of the same elements that have made it more dangerous: Phone cameras and social media platforms.

I assume you mean other genres in photography. The quick answer might be something like spontaneity, but I don’t necessarily feel that good art pays too much attention to genres. We tend to classify after the fact, in order to make us feel more comfortable and in control.

In terms of general environment, I tend to be a city rat. The crazier things look, the more interested I am.

Given that it is legal most places in this country to photograph anything as long as one is in a public space, I think everyone has to decide on their individual moral code and their own ethical limits. These days, I try to avoid taking pictures of children, the homeless or others without agency, but sometimes these caveats are difficult to determine in situations that require a quick response.

There is not one, two, ten or one hundred things that make a photo expressive each and every time. Unless it is part of the conceptual framework of one’s practice, aesthetic rules are dangerous. For every “how to” formula, I can show you a dozen pictures that are amazing precisely because they go against that particular formula.

I’ve been influenced by many people, movements, etc, and I’m sure some of that shows in my work. However, even after all these years, I find it challenging enough to make what I feel is a decent picture, without having to clutter my mind with whether or not I’m original or have a personal style. Style and originality happen (or don’t) as a byproduct of what one does. If thought about too much they can kill the exploratory nature of creativity.

In any visual medium, the best work often occurs when form and content become one and the same.

In terms of digital, I usually don’t do anything I wouldn’t be able to do in a darkroom. So, I’ll adjust density, contrast, color balance, saturation and burning/dodging. Occasionally I crop.

Absolutely. I have had fully-baked ideas that have turned into projects, but much more often I will look at my photos/contact sheets and follow up on something I didn’t realize I’d been doing already.

Interestingly, I’ve spent much Covid time going through contact sheets and slides dating back to late 1971, scanning film and making prints. I’ve found hundreds of images that at the time never made it off the contacts. Naturally there are pictures that I’m drawn to, but I rarely have the same feelings about them as I have about work that others have done. It may be that I photograph in part to get stuff out of my system, and once it’s out, I move on to the next thing.