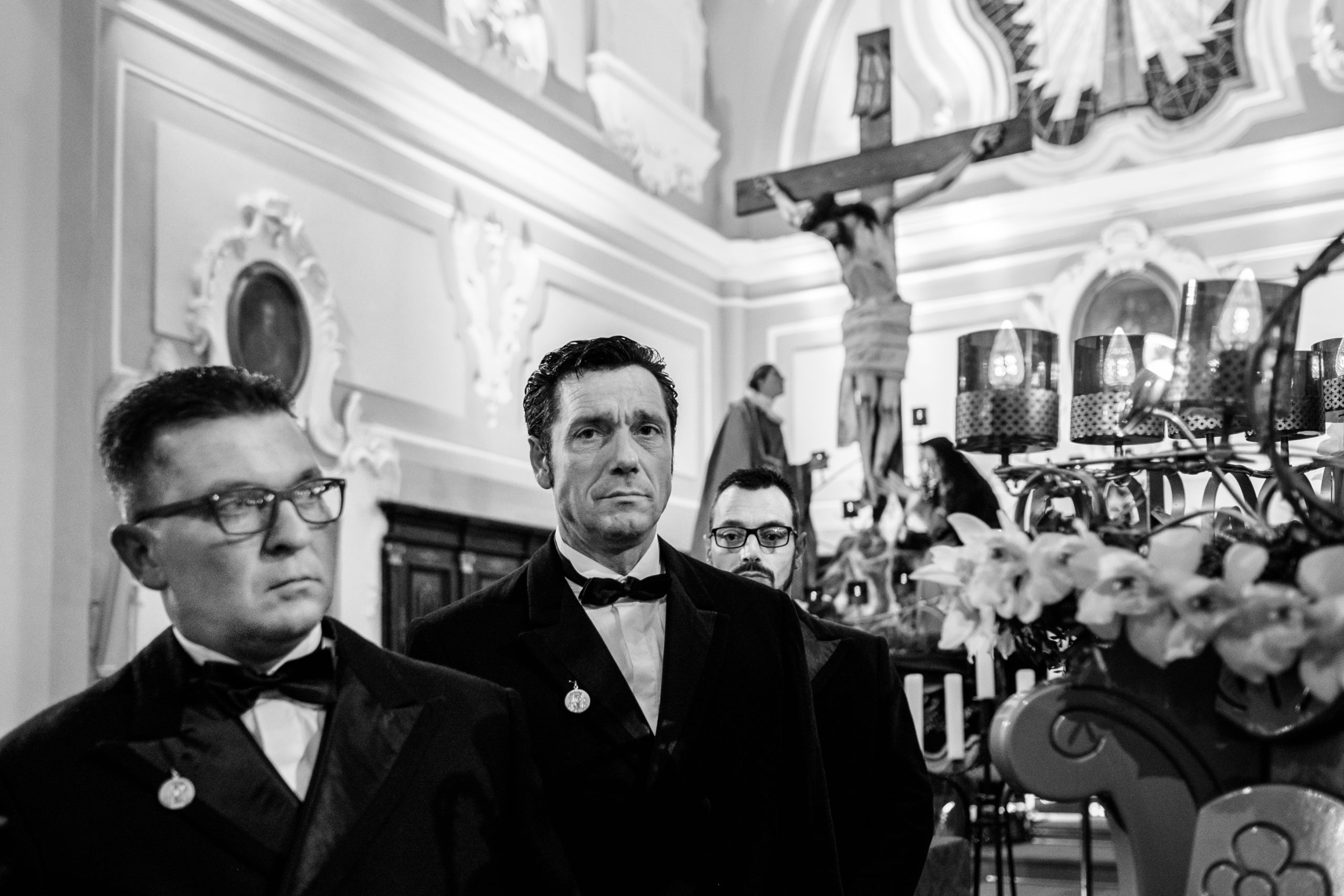 Domenico Tangro was born in Bari in 1974. He approached initially the photography in 2005, but it had been in 2015 that a real passion began, a passion still cultivated.In fact in the same year as well as the passion, photography started to become a study, a culture, an heritage to be expanded without measure, limits and without any break.

The feast of “Santi Medici” is principally based on the procession, called “Intorciata”, that last the whole day. The procession starts by coming out statues from the sanctuary: after they have passed the portal of the church with a certain slowness, people use to kneel in front of the statues and kiss them.Someone follows the parade pointing they gaze to the statues of the two Saints and walking backwards; Among them, others carry heavy candles, usually seven feet tall, through the whole route, walking barefoot with hands and toes penitents for the boiling wax dripping.

Prayer, devotion, spirituality…All you could read in their eyes, the eyes of the faithful, beyond wich there are recounted life stories, misery and pain. They ask for an intercession and the fire of their burning candles is the energy necessary in oder of reaching this intercession.

Taking a shot in the street could be difficult at times; dealing with people’s reactions or making sure it is not invasive in the various situations that could arise, is not always easy. What is your approach in these circumstances? I know that sometimes it could result difficult to approach in a lot of circumstances, especially when you have to deal with strangers, but I have to say that due to use of mirrorless already adopted many years ago, I managed to establish a minimally-invasive, more civil and well-balanced contact with street Photography.

Are you interested in deepening your passion with readings and studies on culture and photographic language? I find really fulfilling and fascinating explore the world of Photography in all of his shades and with all the means possible. In fact I am used to deepen by buying monographs or by read up online on works made by others .

In recent years, Street Photography has caught on, and many photographers have become keen on it. What do you think is the reason why many of them prefer to shoot on the street? In my personal and modest opinion, Street Photography may have taken hold as it has been in parallel its conception as an easy genre. On the contrary I think that this genre is quite complex because the border with banality is fleeting.

What makes it different from other genres? Photography is a proaction of reality.This means that reality is the point of departure and although it is non true that photography doesn’t lie, instead we can say that all shoot are lies…well, I think that at this point the best way to define street photography is as a white lie, a lie that mostly comes close to reality, and in some ways it tries to enclose a photographer’s testimony in a frame. A personal perception that stretches from the eyes of the photographer all the way to the eyes of the readers through the camera lens.

What subjects inspire you and push you to look for the shot in the city where you live or in the places you frequent? Living in the South of Italy, more precisely in Bitonto, a city located in Apulia, where the religiosity is around every corner as for culture, history and tradition, I find the contact with this aspect natural and spontaneous. Despite sometimes my assumption is different, most often I get hit by the surrounding area and by a context of this caliber, regaining all this as protagonist of my shoots.

What is the line you don’t cross in a street photo. Are there ethical rules or is it allowed to shoot everything? A principles of mine, of wich I mostly avail myself, says not to shoot at “unarmed” people. With this term I mean tramps, destitute or any other category of wich I could prejudicing the dignity. While, in case of shooting kids, I shoot only if authorized.

What makes a street photo expressive? Can you recognize, when you’re on the street, all details that can make a simple photo shoot a good photograph?

Good things come to those who wait and often when we least expect them, Hundertwasser. Especially in the Street Photography, with the experience I have learnt that in addition of having an eye, patience always pays off.Patience allows you to catch the perfect moment, the perfect detail in an exact moment in order to strengthen the significance or in order to make a mundane shoot into something unique.

Street Photography as a genre, has developed in you the ability to interpret everyday situations with an original vision and your own style? Art is not what you see, but what you make others see, Edgar Degas.And what better eye, trained and used to capture life behind everything, an eye hungry for peculiarity in the daily life that belong to us, what better suited eye if it isn’t the one of a street photographer…

In a street photo, do you think that light contrasts are important to tell a story or are they just an aesthetic aspect? Beyond the relevant role played by light, shadows and contrasts, all that matters in photography si the message; naturally, like everything, there are trends in photography too as regarding styles and techniques.

After shooting, what actions do you take in terms of processing and editing? Processing and editing are the phases of the process that I found more boring, but obviously they are part of the work, so they as not interesting for me as important for the shoot.I personally prefer to work with Lightroom and to adjust shadows, lights and a number of contrasts.

Do you prefer shots in black and white or colour? I have not a preference.it depends on what I want to produce on readers.

We often hear about “photographic projects” in Street Photography too. Have you ever documented a situation from which, subsequently, a story or the idea of a project was born? Unfortunately I have never had the pleasure or the opportunity of taking part in projects regarding street photography, beacuse only recently I have approached to this world. Even if I have to admit that so intrigued and keen on this genre, I am projecting myself in new adventures with a lot of enthusiasm in order to realize some ideas into something concrete, hoping in the near future.

We often look at the photos we’ve taken over the years. Is there one you’re particularly keen on and why? To estabilish a single shoot in wich I am particularly affectionate it is not that easy.Every photo has its own story and every story has its own charm due to his uniqueness. Nevertheless if I had to leap, I would choose a shoot of mine that I find really emblematic.It is taken from a reportage, wich by the way has allowed me to be selected as one of the best emerging photographer in Italy and to represent the excellence of the photography of our country in China. This reportage I did, was about Lucrezia, an old lady suffering from Alzheimer.